Are UFOs and Aliens Real?

Arguably one of the hottest topics in the paranormal, is the existence of UFOs and aliens. As someone who has witnessed the UFO movement through many decades, it is quite interesting indeed to see the changes this movement has gone through.

But that has changed. And watching this progression through the decades, it is indeed a study in human psychology. Back in the early days of the UFO phenomenon; swamp gas, the planet Venus, and general human delusion where the major cause and the only probability that a respectful scientists could take seriously. While quantum physics for example had already been conceptualized, theorized, and worked mathematically, it’s hold over the scientific establishment was still quite tenuous and the old establishment was not ready to accept some of the far out concepts that came along with the quantum dynamics package.

Now scientists are far more comfortable with quantum dynamics and have moved on to such things as String Theory which has opened up a whole new arena in scientific possibility. It’s so interesting to look back in history and remember the thousands of scientists ridiculing any kind of interplanetary travel because they could not conceptualize, through the scientific method, any possible way to travel the vast distances of space. 20 years ago the scientific community considered travel within distant planetary systems to be highly problematic and most likely improbable unless the voyagers were willing to give up hundreds of thousands of years to reach their destination.
Now the possibility of warp travel is being seriously considered by physicists and astrophysicists. Quantum physics and string theory postulates multiple universes and as such we no longer have thousands and thousands of scientists telling us that long distance interplanetary travel is next to impossible.

With the discovery of new planets outside our own solar system and furthermore the discovery of planets that could harbor life, scientists no longer find it so hard to believe in alien life. It’s a funny turn really for those of us have been paying attention; it used to be that a scientist would be ridiculed if he or she were to take alien life too seriously but now a scientist would most likely be ridiculed if they were not to at least conceptualize the possibility of alien life.

The next step will obviously be when scientists go from their insistence that all alien life is most likely highly simple, such as bacteria or really simple life forms, to their acceptance of the possibility of far more complex life, perhaps even alien life that they would consider sentient. I look forward to that time and yet I am sad that it has taken the scientific community so long to make such a small and gradual jump. I suppose all things must happen in their own measured time but I would love to be able to see some of the more thrilling ideas and conceptions that could come from the scientific community if they were now willing to completely believe in the existence of sentient life outside of this planet.

Where do we stand right now when it comes to UFOs and the possibility of alien visitation? As I said our concepts have advanced a great deal in the last few decades and some of the new theories and models are quite thrilling.

If we are to look at the potential of UFOs and alien visitation though, we will need to break down the problem and do a little investigating of our own. We could begin by looking at some of the more competent studies that have been done into the UFO phenomenon. Many such investigations have been done both in the United States and abroad, such studies include:

But each organization, no matter how skeptic and prejudiced to the information studied, had to conclude that 16 to 5% of the cases that they did study were essentially unknown. That is 16 to 5% of the cases that were studied could not be discredited as being either swamp gas, the planet Venus, or delusion. While the man in charge of the Condon report for example, Edward Condon, seemed to do his best to discredit the entire field of ufology, the very serious scientists working on that committee concluded through serious study that 16% of the cases reported were unknown phenomena.

So a highly educated and intelligent scientific committee has concluded that 16% of the phenomenon being witnessed by people around the world is of unknown origin. That in my opinion is quite amazing and any scientist worth his salt should find it quite amazing as well because it essentially means that there is something going on out there that is UNEXPLAINABLE!

Perhaps next time that some skeptical Inquirer or some academic tries to tell you UFOs aren’t real or that sentient life on other planets is impossible, you should remind him of some of the studies which show that scientists seem to not be able to explain many of the occurrences that are happening on THIS planet right now. You might want to point out that since scientists are not able to explain a significant portion of the phenomenon happening on this very planet right now, that he or she should perhaps not be so adamant about insisting that extraterrestrial visitation and complex alien life are impossible. Or perhaps you should record the conversation and play it back to the skeptic in 20 years when science will have ‘allowed’ him or her to believe in greater possibilities.

So let us take a very conservative number like 5%; let us say that of all of the UFO sightings out there, 5% of them could be really worth looking into because many studies have proven that they are not delusion or misidentification, that they are essentially unknown phenomena. 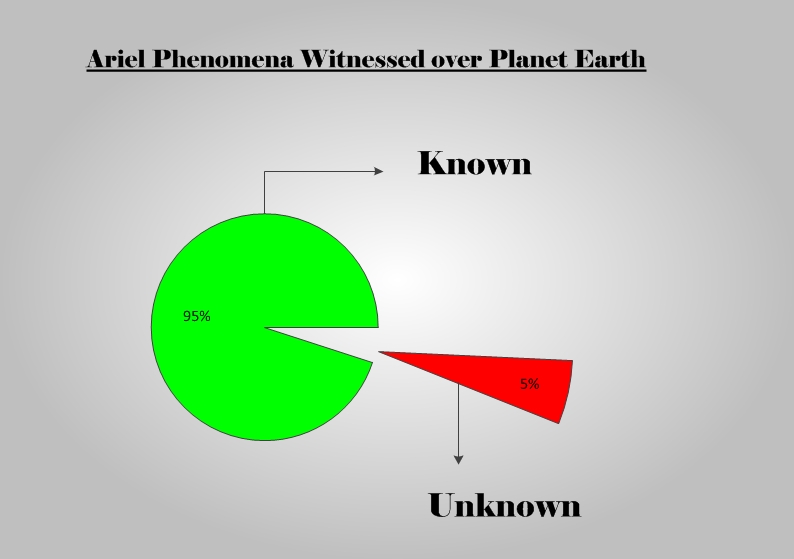 That 5% could be extraterrestrial visitation or it could be some other unknown that we have not considered yet because our scientific theories hold no concepts for us to understand them. In Part Two of the alien question, we will look a little further into this 5% and examine some of the possible causes of this strange UFO phenomenon.