No comments
Categories: A Better Way to Self Improvement

Getting a handle on the QWERTY (or) DVORAK debate

DVORAK is a revised layout of the English keyboard that was invented by the US physician Dr. August Dvorak in 1932. It is said to be far more efficient and faster than the QWERTY keyboard that is standard today. A great deal of controversy surrounds the battle between these two keyboard layouts and their practical application. This paper is written to try and address some of these issues and perhaps help in settling some of the debate. I hypothesize and hopefully prove that DVORAK has great application in the relief of physiological stress that is accompanied by the heavy use of keyboard entry.

Most modern people have become used to spending a great deal of time in front of a computer. Whether this is because of the fact that people now work more and more in an office environment or because they like to spend a lot of time on the internet, the computer (the keyboard that runs it) has become a huge part of all our lives. As a result, carpal tunnel has become an endemic illness that affects larger and larger groups every day.

Basically if you spend large amounts of time on a keyboard, then it is quite probable that you will develop some kind of pain due to carpal tunnel; which is defined as a compression at the wrist of the median nerve. This can cause numbness, tingling, and pain. It can be cured to a certain degree by assuming a correct posture, developing an ergonomic working environment, and by wearing a wrist brace. But a large part of the problem is due to the amount of typing that we do and the stress that this causes on our hands and wrist joints.

If you are suffering from any of the symptoms of carpal tunnel and you have gone as far as you can go ergonomically, then I suggest that you give DVORAK a try.

Is DEVORAK faster than QWERTY? Is DEVORAK more efficient mechanically than QWERTY? The former is a difficult question to prove because of psychological issues that I will get into later, but the latter can be proven with some calculation. In order to prove or disprove the efficiency of any keyboard layout, we must ask ourselves: Which are the keys that I must type in most often, and how hard is it for us to type these keys?
In order to answer the latter question, we can begin by finding out which are the most used letters in the English language? Fortunately there are 2 great sources that might be able to answer this(1):

If you look at a DVORAK keyboard (Fig 1) you can see that Dr August designed his keyboard with these letter frequencies in mind.

Perhaps these sources are old, is there more recent evidence? Actually as a result of statistical analysis, it is now possible to know with relative certainty the frequency of letter usage in English or any other language. The graph below shows the percentage of letter usage in the English language(2): As can be seen from the above graph, both letter frequency measures are very accurate ( the linotype letter frequency is nearly identical to the new data). But how does this stack up when it comes to actual words and to typing in general.

In order to measure this I again referenced two sources to get the most used WORDS in the English language:

Using the first twenty words in each of these sources, I calculated the number of letters that are found in the central letter row of each keyboard layout. For example using the central word row of the QWERTY keyboard:

I did this same calculation for each of the twenty words in each separate source. You can see the result of my calculations on the two bar graphs below (to see my complete calculations, please see the bottom of article). With two statistically viable samples of twenty words each we can see that DVORAK is mechanically about 47% more efficient than QWERTY. This means that without having to move your fingers at all (just pushing down on the key below your finger), you can type a significantly larger percentage of English words using DVORAK. As a result, your hands and wrists will be far less strained and it should improve carpal tunnel by the large reduction on strain, stress, and fatigue.

As you can see from the two graphs, the words chosen by both sources are nearly identical, which is something that you would expect if these two sources are accurate. Because of the fact that we don’t have percentage of words used (actually I did find percentage of words used but it counted words and ‘lemmas’ so not really an accurate representation in my opinion), we can’t have 100% accuracy on our calculations. But with the above method, you can easily make a decent estimate of the mechanical efficiency of DVORAK. Also I did not want to pursue these calculations to a great extent because of the fact that generally speaking (a mean of the English population) we will all be using these words, but specifically we might be using words regularly that are quite different from this mean. For example if you are a biologist, or a computer programmer, you will most like have your own set of used words that are slightly or very different from the ones sampled here. In this case, you will have to try and come up with your own list of most used words and calculate the keyboard efficiencies as I did and decide for yourself whether switching to DVORAK will be of any help to you.

What about speed?
Well mechanically we can easily ‘guestimate’ that DVORAK should be about 47 % faster than QWERTY. Barbara Blackburn of Salem, Oregon seems to have given great credence to this when she became the world’s fastest typist using the DVORAK keyboard (212 wpm!)(5). But why then isn’t everybody switching? And why are some people finding it so hard to get positive results with DVORAK?

There are two big reasons for this and they both have a psychological basis:

*  The first reason is that it is actually hard to learn a typing format. In order to learn QWERTY, you probably began by playing around as a kid. You found your parents computer or typewriter and started to play with that. Eventually you had to take some kind of course in school, which you had to pass, and now you possibly find yourself in a work environment that uses machines that only support QWERTY. That was a lot of effort to learn one typing format!

This relates directly to the ‘learn to ride a bicycle’ weirdness. At first the effort to learn to ride a bike is hard, but after you ‘get it’, you never forget. You don’t think about what you are doing, you just do it. Learning a keyboard format is the same thing, it took you a bit longer perhaps to learn QWERTY but now you don’t think about it, you just let the fingers magically find the keys on their own. Actually if you had to think about it, you would probably screw up all the time. This is because neurological connections in your head have been established through repetition and without thought resistance, your brain will naturally take the neural path of least resistance. The less you think about doing it and just do it, the better you do.
But as anyone who is bilingual will tell you, you can have two competing and complex neural paths in your head. There will always be bleed-through (as in Spanglish for example) but your brain is complex enough to be able to handle both complex neural paths.

*  The second reason is that nasty/healthy tribe mentality that we all suffer from. Most of human history is the history of tribes. We are hardwired to instinctually identify with a group of individuals and to fight to protect that group and what it stands for. If I am from the small DVORAK tribe and you are from the QWERTY tribe we are going to be instinctually antagonistic towards each other. If I am from the PC tribe and you are from the Apple tribe…
Well you get the idea.

We are all very complex creatures that love our tribal connections( did someone say Facebook?), but sometimes those tribal connections don’t make logical sense. We can now be part of many tribes and can consciously choose which tribe suits our personal needs best.

Speed seems to be better with DVORAK, but you will have to prove that to yourself.
There is a great driving force in life; this driving force is called need. If you have pain and are suffering as a result of carpal tunnel yet you need to keep typing because of your job or personal desire, then I suggest that you switch to DVORAK. I believe that that the calculations above prove that point.

If you have the need to use DVORAK then I suggest that you take the time to learn this keyboard layout properly, which is actually a lot easier that you think. The links below will be of help I hope. I am not an affiliate and I do not endorse any of the products and sites below. They are given here as help and additional resources for any interested parties. 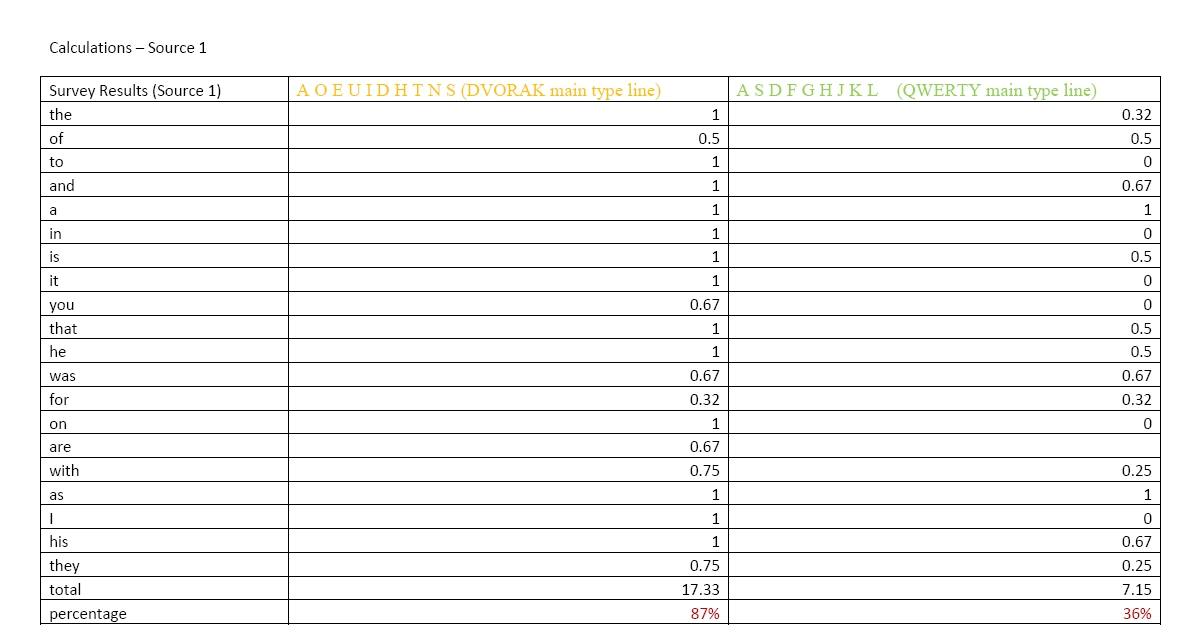 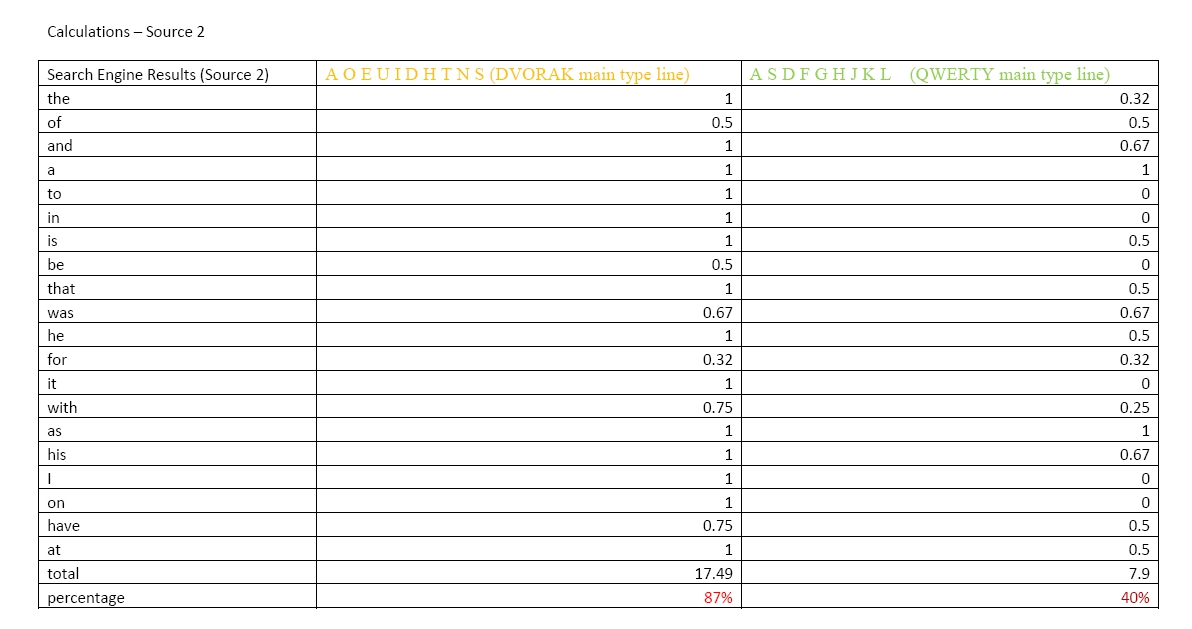