Leaders are Masters of Paradox

Those that would be successful leaders must master paradox.

Leaders must be in it to win. Weather its overcoming an obstacle, finishing an objective, or beating the opposition; leaders have to be in it to prevail. If you do not carry a winning objective in mind, those that follow you will soon rebel. 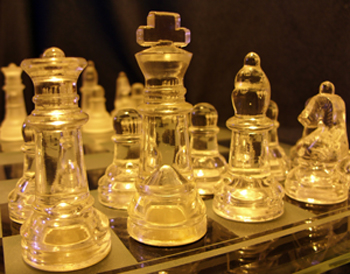 Leaders need followers and followers need to feel that they stand behind someone that is strong and will succeed against any opposition. You cannot fake a winning attitude. You must know deep within yourself that you can win, that you will win, and that you have the methodology to win.

Winning means being a master of contradiction.

When they expect you to go high, you have to go low. When they think that there is no way that you can catch up, you must appear ahead of them. To do this you have to appear to be one way while in reality you are the complete opposite.

To win, you must do what they don’t expect. In order to catch the opposition off guard, you have to trick them into thinking one thing while in reality you do something completely different.

When you have finished all your work and are ready to move ahead, appear totally unprepared. Frazzled and unready in appearance, within you are ready to strike ahead. Act agitated but be prepared.

When you are ready to let them have it, act as if you are ready to run. Don’t telegraph your moves, especially your attacks. An attack or strike is a forceful action; this can be a strong attempt to overtake an obstacle, direct line of questioning in a debate, or the launch of a new product.

If you are boiling mad and crazy with emotion, appear to be the picture of calm peacefulness. This is beyond not sweating the hard stuff. This is outright deception. If you are calm, then appear emotionally crippled. In other words sweat when it suits you. If you care, act as if you don’t but if you don’t care then act like a nervous Nelly.

When your people are cohesive and united, make them seem like they are all over the place.
The idea then is to portray a completely different image of what you are. The reason for this is simple and obvious; if your competition knows what you are going to do, they can counter or block any move that you make.
Winning means taking the initiative in all action and always being one step ahead of the competition. If your are easy to read then you are at best second. People do not follow second best.

But don’t make the mistake of appearing weak , clumsy, or haughty to your own people. The idea is to deceive the opposition and not to discourage those that are under you.

Let your people in on your deceptions. Command with a velvet touch and keep them in the loop. When in private council with your people, talk straight and let them see your strength. If you are planning something big then let them know about it. If its better that some people stay in the dark, at least let them know that you are on top of things and plans are in the works. Always assure those that you would lead that you have it under control.

Those that win act as if they can’t…until it’s the right time to move.