Learn From the Joker and Cure Yourself with Laughter 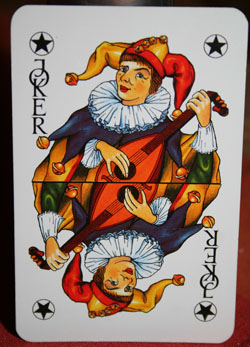 I would imagine that many of you have seen the Batman movie, “The Dark Knight”? In it Heath Ledger gives the most outstanding interpretation of one of Batman’s most sinister villains; The Joker.

The Joker is an incredibly evil creature that is the embodiment of contrast. He is at once seemingly insane, yet at the same time he is seemingly a man of great vision and dark wisdom.

Heath Ledger did a perfect job in capturing the essence of that malicious trickster spirit. He was able to bring forth the madness and the wisdom that is the essence of the Joker, the clown, or the fool.

If you look back at old European history, you will realize that the creature now known as ‘the clown’ was really a malicious being, bringing madness and fear to all that he came in contact with him; Definitely an odd beginning to the modern version of the clown. It might just explain, I suppose, the reason why most kids start crying their eyes out and run away in fear when they see their first clown at some birthday party. If you can’t quite grasp the evil of the clown, I recommend reading ‘It’ by Stephen King.

But the source of the clown’s madness and the source of the Joker’s power, lies in the fact that he knows something that we don’t know, or are afraid to know. The Joker has looked into the face of the abyss and he has gone mad from this vision.

The being that is now the Joker was once sane and he was endowed with a gigantic intellect. But this great intelligence was his downfall. His questioning and searching finally led him to the edge of the abyss, an abyss that he could not cross; An abyss that drove him mad and nearly killed him.

When the Joker/clown emerged from the mouth of the great ‘Lurker of the deep’, his mind was shattered. His face contorted into a grimace of pure madness, his hair frayed and discolored, his body bent and deformed from the great strain on his nerves.

But the Joker, though mad to most, survived and flourished. He survived by doing that which seems to be beyond reason. He survived by mimicking what he saw in the great void…Chaos.

And his great medicine was laughter, and he laughed because laughter is beyond reason, beyond thought. Laughter is chaos; in the brain. Laughter relaxes all the tensions of your body. Laughter expels all the pain and the fear. It is a convulsive explosion that allows us to experience, ever so briefly perhaps, the freedom of totally letting go. If you wish to exorcise a demon, laugh at it.

And that is the trickster’s joy, his greatest gift to us; he makes us laugh for the sheer love of Chaos. He acts and says crazy things, forcing our brains to make great leaps in perception. Our synapses twitch one way, then the other and AHA!

“A clown falls down, oh what a mess…haha.”
“What do Walruses and Tupperware have in common? They both like a tight seal of course! Hahaha!”

So, let us take some advice from that evil clown, The Joker:

Find a time or a place when you can be alone and undisturbed, the lonelier the better since you don’t want to end up in a padded cell wearing a really uncomfortable jacket; and laugh.

It will be a bit hard to get going at first but you will notice that if you keep at it, soon this effort will turn into uncontrollable laughter. Just keep laughing harder and harder until deep belly laughs begin to flow out of you naturally.

At the end of the 5 minutes, you will feel a little tired but cleansed. This exercise will relieve your stress and cure you of any oppressive feeling that you might have. Believe me, if you can laugh at chaos, it will take a step back.

Just in case you might think me insane 😛
Here is a little extra sample of the power of laughter: