Are Things Getting Weirder? Is the Weather Changing?

Many people believe that the world is getting stranger by the year. Everything just seems more chaotic; remember that word ‘chaotic’, we are going to come back to it because it is very relevant to what we are going to talk about in this article.

The weather is weird; all you have to do is look out your window or look at the news and you will realize that meteorologically speaking things seem to be in a bit of a mess.

But it’s not just the weather that’s getting more unpredictable and strange; there is also high strangeness everywhere you look.

Everything from plagues of spiders attacking villages, to strange sounds and odd lights in the sky, it seems everything is just getting weirder and weirder. If you don’t believe me, go on YouTube and look up something like;  ”strange events of 2013” or something similar; you’ll get a host of YouTube videos that might just make your hair stand on end.

All the cool kids are talking about global warming. Certainly scientists have proven this to be the case; the world is getting hotter? Right?

In actuality, proving global warming is actually quite a tricky affair. Believe it or not, that last sentence was a very difficult one to write down. The reason for this is that the global warming agenda has gone beyond a mere theory into a type of theological fact. To disagree with this ‘theory’ of global warming can be akin to debating religion.

But in order to discuss the high strangeness of all things as of late, we must start with this rather large wrinkle.

This article is not written to try and prove or disprove global warming nor is it written as a launching point to try and debate global weather models. It is an article that proposes a theory to try and explain why things seem so strange in this brave new world.

The accuracy of global warming models, the ones used to try and predict global weather changes and give credence to the global warming theory, are not as accurate as some might suppose. A simple example of this fact can be ascertained by examining your local weather forecast.

While the weatherman can predict certain atmospheric conditions, the accuracy of these predictions is usually not that good over time. Certainly within the first two or three days, most weather forecasts are pretty good but this accuracy tends to diminish quite quickly as greater amounts of time are added to the equation. In other words meteorological models do well when it comes to tomorrow’s weather and perhaps the next day but they fail quite miserably when it comes to telling you what the weather is going to be like next week or the week after.

Most meteorological forecasts use a type of global weather modeling. The mathematics and software used to study tomorrow’s weather are nearly identical to the ones used to study global warming. Large and highly complex programs are put together and are run through powerful computers. These programs try to replicate current global conditions and using logical algorithms try to predict past and future global weather conditions. The accuracy of these models is good but not perfect, they can’t predict every possible variation and as a result their accuracy fails over time; as can be easily seen by studying the accuracy of local weather forecasts. If the accuracy of these models fails over time, then using these models to predict global warming can be quite difficult to say the least.

Certainly there’s a lot more being studied when it comes to global warming. But as I have said this is not an article written to debate the issue; this is an article that tries to explain the ‘high strangeness’ of our current world, and my theories have a direct relation to the mathematical models that are being used now to study global weather patterns.

Why is it that these mathematical models are so bad at predicting the weather, especially over time? Why is it that with the processing power of our current supercomputers, we can’t seem to be able to predict what the weather is going to be like next week?

The simple answer to this is: Chaos.

To be more precise we can say that the answer lies within the realm of chaos mathematics. This is a branch of mathematics that tries to study dynamic systems. The best way to explain this would be to think about a moon orbiting a planet:

If you have one moon orbiting a planet like we have here on earth, then it’s pretty easy to predict the orbit of that moon over time. But as soon as we introduce another moon into this equation, predicting the orbit of a particular moon becomes very difficult. The prediction actually goes from hard to impossible the further that you try and predict that orbit over time.

Now imagine introducing ten more moons into the orbit of a planet. Each moon affects the orbit of the other moons making any kind of prediction impossible over time. Also don’t forget that this is not a closed system; the gravitational pull from other planets and stars might affect the orbit of our moons as well, for example. This is the problem with statistical future measurement or most model based predictions for that matter. The better the model the better that it is at predicting both past and future events but all these models fail over time.

This basic theory tells us that small actions can be the cause of large effects on a deterministic nonlinear system.  The mathematician Edward Norton Lorenz coined the phrase “The butterfly effect” in order to try and explain how very small actions (like the flaps of a butterfly’s wings) could cause huge effects (like a hurricane) in a complex interrelated system over time.

Using the above analogies you can see how predicting the weather would be such an incredibly difficult thing using current weather models. These models are made up of a huge number of ‘sets’ that act very much like a moon or a butterfly. If it is impossible to predict the trajectory of a pair of moons over a certain length of time, then imagine how difficult it would be to try and predict meteorological configurations that are made up of thousands (millions) of freewheeling probabilistic units.

Now might be the time when you ask yourself; so what does all this have to do with strange weather and strange events?

The answer to all of it, based on my theory, is simply: human population 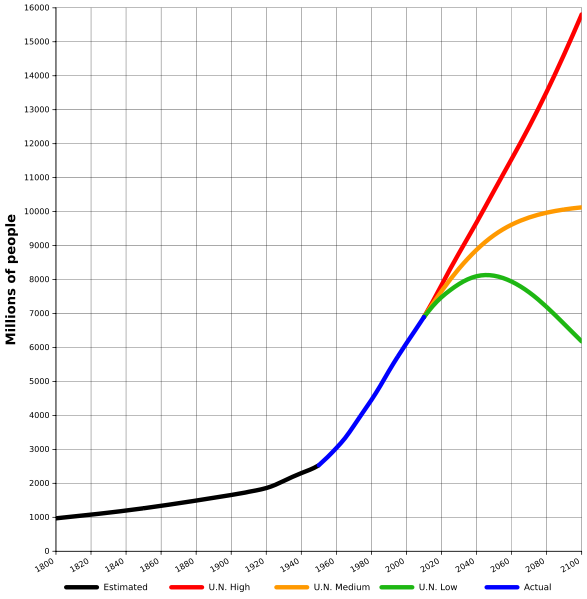 If we think of the Earth as our nonlinear system and we think of every single individual human as being a butterfly then you could see how the introduction of billions of new individuals (butterflies) could have an incredibly powerful effect on that system.

As you can see, this idea does not discount global warming. Global warming could help to explain much of the weird weather that we are experiencing but ’proving’ that global weather temperatures will be escalating over time without any deviation is most difficult and as far as I’m concerned it’s still a theory.

There is something though that you can prove using chaos mathematics right now; and that is that the introduction of so many new human beings into the earth ecosystem is making the system more random, more chaotic, and stranger. If a butterfly in the Amazon can help create a hurricane halfway around the world then imagine what 7 billion and counting humans can do.

Sure that might explains the strange weather you say, but what about all the other strange stuff that’s going on?

Well we can certainly consider the possibility that the world was always this strange, the only difference being that now there’s a heck of a lot more people carrying around digital recording devices. Perhaps nothing has changed, there’s just more people watching and recording.

But there’s another theory that we could consider; the possibility that it is the very thoughts and intentions of these 7 billion plus individuals that is making the world stranger and stranger every day.

If you are reading this article on this site, then it is possible that you believe in the power of thought. This website after all is dedicated not only to self-improvement but to the possibilities and potential of thought and intention.

I believe that thoughts are things that internal intention creates external effect and since you are reading this article then I would assume that you perhaps believe the same thing.

Now using our possibly mutual belief, consider what an ever increasing population must be doing to the world. If the power of intention and thought is real, and the probability of the manifestation of a thing increases with the amount of thought energy applied to it, then what must billions of intentions be doing to the planet right now?

We can consider thoughts, and beliefs for that matter, as being like a weather pattern in and of themselves. This pattern flows in and around the planet as different people think and feel different things. As different memes settle in and take over certain areas, they can in many ways be seen as storms gathering momentum and sweeping over the continents.

Thoughts of Jesus, Armageddon, freedom, fear, the new world order, and perhaps Mickey Mouse, all intermingle. Thoughts of a similar nature come together and coalesce into bigger thought patterns, perhaps even growing into a full blown memes with the capability of changing the hearts and minds of millions.

If thoughts are things, then the reason for the high strangeness is quite obvious; more people. And since we know that the human population is increasing we can definitely count on one thing:

Things are going to get weirder!