What Will Really Happen On 2012

Note: The information in the article below is the result of a decade of personal research. I hope you read it and interpret it with your own personal objectivity, and I hope that it motivates you to do your own research on the subject. Since all of the work is really based on hearsay evidence, there is no way to prove any of it to a scientists satisfaction. But all myth is like this and yet, if one knows of the powers of the mind of man, one realizes that in all cases myth is far more powerful than objective truth. 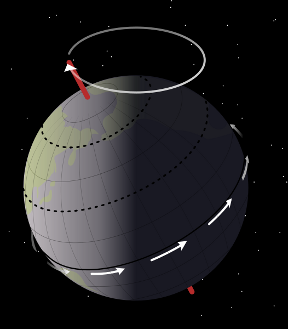 There are many conceptions and misconceptions about 2012 and what it means. Many believe that the Earth will end or at least that there are is an incredible cataclysm coming that will wipe out all or most of the human race.

As we have explored in the previous article [Top four things people think will happen on 2012], the amount of craziness and wild theory surrounding 2012 is amazing. In this article though we will try to put into words what ‘those in the know’ actually believe to be happening and what will happen. Those in the know is short for; old schools of thought that have existed for thousands of years, maintaining ancient knowledge and wisdom. It is also my term for those that have and can figure it out and are crazy enough to believe it.

In order to truly understand what the ending of the Mayan long count really means, it is better that we talk about The Precession of the Equinoxes. The precession part is talking about the change in the direction of the axis of the Earth. And the Equinoxes are the great belt of constellations that one can see from the earth, or if you prefer, the Astrological signs: Aries, Taurus, Gemini, Cancer, Leo, etc.

I will not go into any deep and technical explanation of how this is all believed to work astronomically. You can do further research yourself if you want to by just Googling some of the key words from this article and following the line of reasoning set here. I will try to explain as best I can what is believed to be happening so that you can understand what is involved. A small note; I doubt that you will find very much or anything at all on some of these theories. While the science data is easy to find, along with great videos, the metaphysical theories are relatively unknown, which is the reason I suppose for some of the great mess and fears surrounding 2012.

What you will find that is very similar, is the belief that the Earth will be going through the ‘Galactic Plane’ on this date. In the last article I explained why this is now known to be erronous. I beleive that this is a distortion of this ancient myth that I am talking about here, and that is the best way that people have been able to make sense of all of this. But what I propose here is brand new and can expalin many ancient mysteries as well as propose some wonderful future possibilities for us all.

As many know, the Earth has a slight tilt to it, about 230 . This tilt though does not always face in the same direction, relative to the other bodies in the galaxy. The Earth tilts sort of like a spinning top, moving 100 every 72 years. Since there are 360 degrees in a circle, and it takes 72 years for the earth tilt to move 1 degree then a full circle of the tilt of the earth takes 25,920 years which most round out to 26,000 years.

Each full circle is called a ‘Great Year’ or a ‘Platonic Year’. One of the major characteristics of this Great year is that as the earth makes it slow tilt turn, the sun will be seen to rise (from the perspective of a person looking into space from the surface of the earth) in a different point in space. The ancients created a large band of sorts which they sectioned off into twelve equal sections. Each one of these sections represents an astrological sign,  each one of these signs represents an age of the Zodiac which is supposed to last 2,160 years. Many believe that we will be entering the age of Aquarius very soon (some believe that it will happen at exactly December 21, 2012) for example.

The importance of all this is relative. Different people measured things using different terms that can make things confusing. For example; in the west people used the Zodiac, but the Maya used the Baktun. The important point here is that Ancient people, especially the Maya, were far better at astronomical measurement than many would like to believe. And that these people made very accurate estimations of the Platonic year, which is very important if we are to understand what some believe will happen on 2012.

Before we continue, we will need to look into another very important celestial body. A very ancient term for this body is ‘The Black Sun’. Again this is a term that is used in Western Schools but it is a good term and the one that I will use here. The Black Sun is a name given to the very powerful gravitational body at the center of our galaxy. Many scientists believe that at the very center of our galaxy, there is a massive Black Hole, and that it is this Black Hole that is responsible for keeping our entire galaxy within our current rotational plane. It is also interesting to note that if you were able to physically see this central mass, it might look very much like a black sun. 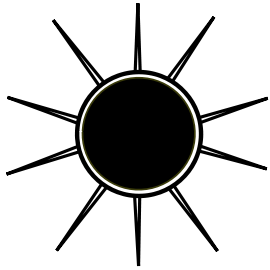 Now this black sun is very important because it is believed, according to the theory that is presented here, that the rotating earth axis spends half of the Platonic year (13,000 solar years) pointing towards the Black Sun and the other half (13,000 solar years) pointing away from the Black Sun. The importance of this is that there is an incredible difference in the energies present on the earth depending on which way the earth is pointing.

While the Earth is pointing towards the Black Sun, there is a positive influence. The energy present on the earth is said to be positive as we all move towards the center of the galaxy and the near infinite power there. This is the time when great civilizations become present on the Earth and men become enlightened (by the Black Sun) and realize their true power. It was during this last cycle that Atlantis came about. It was from this time that all those amazing stories and myths come from; these being actual fact.

While the Earth is pointing away from The Black Sun, we are said to be in a dark cycle. The energy is negative and there is chaos and destruction on the Earth. People become selfish and violent as they lose their connection to the great powers. Most importantly people forget; they forget their connection to all that is and knowledge becomes scarce. War and strife are common and become more and more pronounced as we face further and further away from the Back Sun.

We are currently near the end of this negative cycle. That is why there is and there has been so much strife within our recorded history. War, killing, and disasters are the norm, and while there are certain people and mystery schools trying to keep alive the old ways, we are all general savage and primitive.

But the end of the great long count is upon us. And while the dates of the Mayan long count don’t seem to add the same as a platonic year, this long count none the less is the best calculator that we currently have on Earth of the great cycle change. It is believed by some then that December 21, 2012 is the beginning of the new cycle. Here we begin the slow and methodical movement towards the Black Sun. As we do so, we will again begin to remember lost knowledge as we progress towards an enlightened age.

What does the 13,000 year half cycle change really mean? Please read my next article: What does the Black Sun 2012 enigma mean?